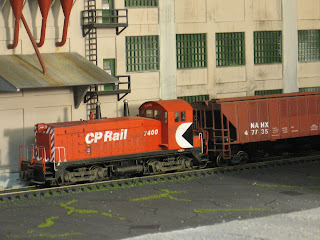 Is the building, road, track, locomotive or car in this
photo perfect? No. But it's good enough.

“The perfect is the enemy of the good.”

The 18th century French philosopher Voltaire didn’t have model railroading in mind when he came up with that quote—but it certainly applies to our hobby.

In life, Voltaire suggested, pursuing the best or perfect solution may end up doing less actual good than accepting a solution that, while not perfect, is effective and gets the job done.

The most famous proponent of this less-than-perfect, or good enough approach to model railroading, is Allen McClelland. It’s a variation of the three-foot rule—the rule that says that anything that looks good from three feet away is good enough.

“As long as I supplied enough context for the viewer to see that he or she was indeed visiting central Appalachia in a given time period, my time could be better spent on doing other things rather than super-detailing or finessing the Good Enough parts.

“When it was all said and done, the entire railroad could have been Exhibit A in the world of Good Enough.”

Joe Fugate, creator of the magnificent Siskiyou Line layout, said something similar on a discussion board about making realistic looking switches.

“The more fiddly you make doing everything on your layout, the more you make it unlikely it will ever happen,” he wrote. “For a large layout, Allen McClelland’s good enough principle is not just a good idea—it’s the key to actually accomplishing something.”

Good enough has also been my philosophy with the M & M Sub. That was partly based on time and money available to build the layout, but also on my own skill level—I simply wasn’t able to reach the lofty heights attained by other more skilful modelers. Plus, my ultimate goal was to build a working layout; I didn't have time to be finicky.

(Of course, the longer I was in the hobby, the more skills I acquired and the more my concept of good enough changed—what was good enough when I started in model railroading isn’t good enough today. But I still don’t worry about achieving perfection. If I did, I wouldn’t have gotten anything done.)

My goal for the M & M Sub. is plausibility, not perfection. Like Tony, if a visitor finds that my layout reflects what he or she might expect to see on a CP Rail-themed model railroad set in Manitoba in the mid-1990s, that’s good enough for me.

To paraphrase Voltaire, I never want the perfect to be the enemy of the good enough.
Posted by JDL56 at 2:47 PM