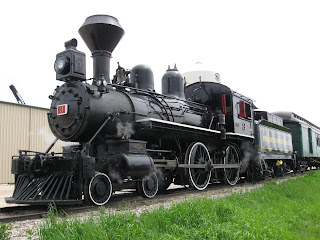 The May 28-30 NMRA Thousand Lakes Region "Steam on the Prairies" convention in Winnipeg was a great success! 146 people registered; compared to other regional conventions, likely a small turnout, but large for the Thousand Lakes region.

In addition to the usual clinics and layout tours, "Steam on the Prairies" featured, well, steam on the prairies. The convention included a ride on the Prairie Dog Central (http://www.pdcrailway.com/), one of the oldest regularly scheduled operating steam-powered trains in North America.

The convention special was headed by 4-4-0 No. 3, built in 1882 in Scotland for the Canadian Pacific Railway. It pulled a combination car and three coaches; none of them were built before 1913.

The afternoon started out sunny, but later it poured buckets; after dropping convention participants off at the Hitch n' Post, a restaurant along the line, #3 went back to the station for water. But the coal in the tender turned to porridge; the crew could barely keep steam up. The GP9 was used to bring convention-goers home from a banquet. 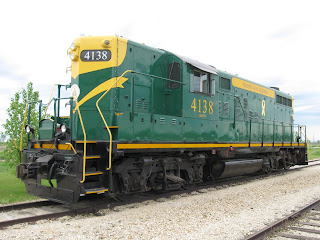 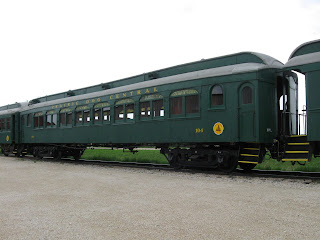 Coach #104, built in 1906 by the Crossen Coach
Company for the Canadian Northern Railway. 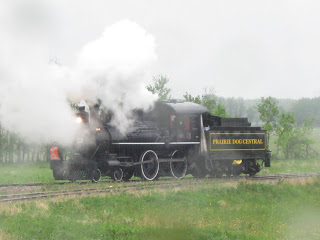 It rained buckets during the trip! #3 is turning
on the wye during the downpour.
Posted by JDL56 at 8:49 PM