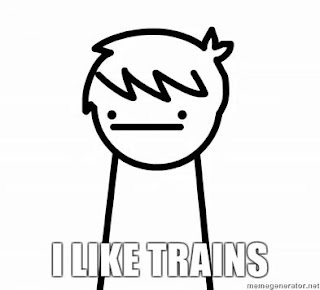 Not only am I older, I am decidedly uncool. Which is why I hadn’t heard about Tom “Ska” Ridgewell, aka TomSka, before.

TomSka is a twenty-something YouTube filmmaker, best known for his asdf movies. (Pronounced “ass-duff.”) According to one writer, the movies consist of short scenes featuring various stick-figure characters with one-liners, mostly depicting random and absurd scenarios like throwing cheese at a flying saucer.

(In case you’re wondering who would ever watch something like that, to date TomSka’s videos have been viewed over 139 million times.)

One of the characters in TomSka’s short animated cartoons is a boy who is prone to exclaiming the catchphrase “I like trains,” whereupon he or another character is run over by one. The popularity of the I Like Trains character prompted TomSka to create a short movie featuring the boy. Appropriately, it’s titled: I Like Trains.

I Like Trains has already been viewed over 5.5 million times. (I’m guessing they aren’t all model railroaders.)

In case you’re wondering about the meaning behind TomSka’s videos, here’s what he said about them: “They are super minimalist non-sequitur comedy, jokes that don’t make any sense, in and out in about three seconds, tailored to appeal to that YouTube mentality.”