2015 marks the 60th anniversary of the Winnipeg Model Railroad Club (WMRC). The celebrate the event, the club created a new logo and a decal club members could apply to rolling stock (below).

As a member of the WMRC, it was important to mark this important occasion on the M & M Sub. But how?

Then late one night an unknown tagger furtively came up with a way to help me, and the club, celebrate its special anniversary. 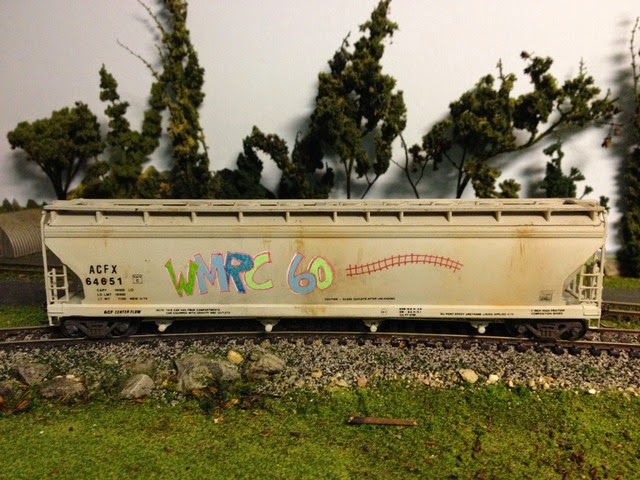 Since the layout is set in the modern era (the early to mid-1990s), it's only appropriate that the best commemoration is one that fits that time: Graffiti.

To make the tag, I used gel pens, a method I have employed with other pieces of rolling stock.

Up close, it doesn't look as convincing as a commercial decal. But using the three-foot rule, it looks just fine (to me, at least).

As for the WMRC itself, the club has been around a long time, but it isn't the oldest model railroad club in Canada. That honour goes to the Model Railroad Club of Toronto, established in 1938.

The second oldest, from what I can tell, is the Model Railroad Association of Montreal, founded in 1950.

(Anyone know of any others in Canada founded before 1955?)

In 2005, the WMRC marked its 50th anniversary with a joint convention with the Canadian Association of Railway Modellers, the NMRA Thousand Lakes Region and the CPR and CN Lines SIGs.

This time around the club is being more low-key, but is celebrating all-the-same.

And now that celebration  includes a tagged car on the M & M Sub.