Railway Timetables, or What Would You Save if a Fire Broke Out? 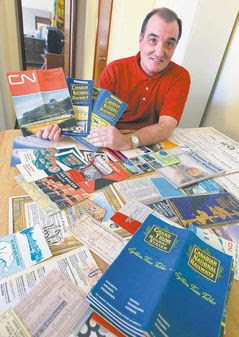 Every Saturday, the Winnipeg Free Press (my hometown newspaper) has a feature about collectors called My Stuff.

In the article, Brian is asked: "If your house was on fire, heaven forbid, what's the one item you would try to take with you?"

For Brian, the answer is easy.

"First, I'd grab my mom and dad's photo albums," he said. "Then I'd go back in for my railroad stuff, even though I'd probably die trying to salvage everything."

One of the things he'd go back for is his collection of railway timetables--of which he estimates he has thousands. Some came from his father, while others were collected when he was a teenager hanging out at the local train station.

Today he finds them in flea markets and antique stores.

The most valuable artifact in his collection isn't a timetable at all; it's an 1890 railway pass signed by William Cornelius Van Horne, who supervised the construction of the CPR in the late 19th century.

"I feel obligated to save it [his collection] from the dumpster," he says. "Some people probably think, 'Oh, it's paper, it's worthless,' but to me each item is a little piece of history."

Click here to read the full article in the Winnipeg Free Press.
Posted by JDL56 at 7:30 PM