Before and After on the CP Rail M & M Sub.

It's been a while since I posted anything about the CP Rail Manitoba & Minnesota Sub. itself--I've been having too much fun posting articles about other layouts and various subjects.

Since I took a few photos recently, this seemed like a good time for some before-and-after photos.

As those who have followed this blog for awhile know, a year ago I dismantled the centre peninsula. I reduced it from a three-level cliff, tunnel and prairie town (on the top level) scene to a one-level prairie scene (still under construction).

Some people, hearing about the changes, wondered if I was nuts--how could I possibly destroy what took me years to complete? Not nuts--just bored and needing a new challenge. Since moving to another house or changing scales was out of the question, I opted to re-do a portion of the layout.

As you can see from the first photos, the top level of the layout on the centre peninsula has basically been dropped down the lower level.

One thing quite noticeable about the change is how it opens up the room--it seems bigger now, and one can see the trains from all spots in the room.

Of course, it isn't quite fair to compare a finished scene with a scene under construction; one day I'll have to re-take these photos when the new lower level is finished.

In any event, here are some before-and-after photos so you can compare the scenes from then to now. I do miss the old scenes--it was fun to watch a train grind its way up the grade through tunnels. But I don't miss wondering what to next with a nearly finished layout. Once again, I have something to do!

(You can find a list of links to posts about the making of the new peninsula here.) 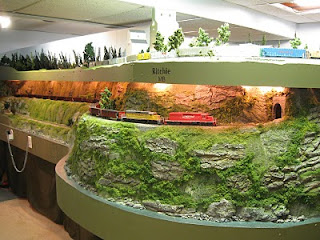 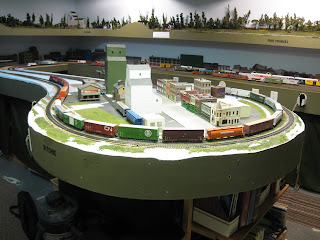 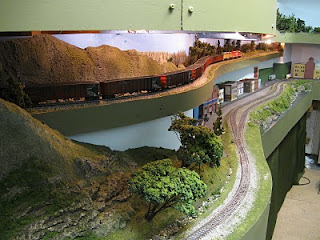 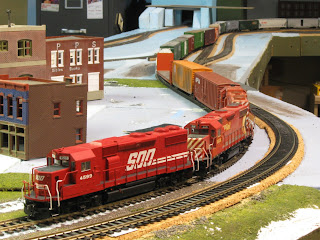 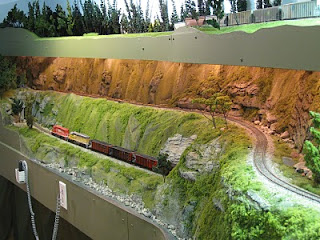 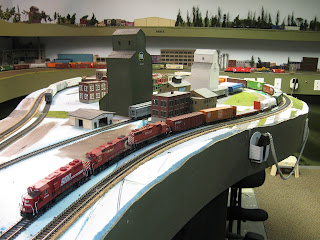