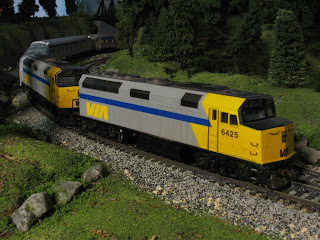 It's been a while since I made a video of the layout. But last week I got the bug to make another one, this time of the recently-completed scene near Turney, Man. on the upper level.

Originally, the track here curved back into the room along the centre peninsula. When I took down the upper level of the peninsula, the tracks needed to curve out of the layout room into the upper staging yard in the adjacent storage room.

To make this work, I needed to hide the hole where the tracks left the layout--a process which was the subject of a series titled Hiding the Hole.

This video shows some action where the tracks leave the layout to enter the staging yard. It features several freight trains (from different angles), and VIA's The Canadian. (Or, at least, my Con-Cor version of it, which is not at all like the prototype.)