After dissembling a large section of the M & M Sub., I had wires to reconnect. At first, I thought it would be easy--a few reconnections and back in business. Wrong!

All layouts, we know, have gremlins. They usually only come out when company comes to visit. Some gremlins hide in the trackwork, mischievously derailing trains in places they never derailed before.

Some hide in locomotives and rolling stock; normally reliable engines and freight cars suddenly develop problems--the locos won't go, or the freight cars decide not to stay on the tracks.

My gremlins hide in the wiring. Fortunately, they never come out when company is around. But whenever I do anything to the wiring--such as move a wire--they become extremely agitated and offended. (It's as if I disrupt some mysterious natural balance.)

That's when normally reliable wiring doesn't work anymore. That's also when you'll find me underneath the benchwork, chasing down the problem (and cursing under my breath).

So I shouldn't have been surprised at what happened when I disconnected wires to four blocks while taking down the centre penninsula.

(Editor's note: "Blocks" are things that model railroaders who use DC--otherwise known as Dinosaur Control--use to power their trains. If you are under the age of 20, ask your grandfather.)

Suddenly, blocks that worked fine before the changes stopped working, including blocks nowhere near the now absent penninsula. Fortunately, I was able to find the problems with a minimum of effort, and soon had things back up and running again.

Since I also installed some new trackwork on the new lower level, I needed to add new feeders. There is a school of thought out there that maintains, with near-religious fervour, that feeders should be soldered to every section of flextrack. No doubt, this works fine. No doubt, too, it takes time.

I have discovered that three feeders per block is sufficient--one at each end and one in the middle. That way, if a joiner fails somewhere along the line, power will get to the track one way or another. (DCC may be another matter.)

One thing I have to admit, though, is that I can't solder to save my life. At least, not neatly. My early attempts to solder wires to tracks resulted in unsightly blobs that were impossible to hide or disguise. I needed a better way. 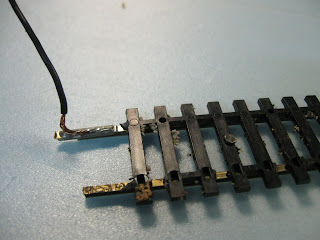 I found it with track joiners. What I do is put a small piece of track upside down on the layout, or any other flat surface. I attach a joiner, then solder a feeder wire to the bottom of the joiner.

When I want to attach it to the rail, I either drill a hole (through the plywood) or poke a hole (through Styrofoam) and drop the wire into the hole. I connect the wire to the main feeder below the layout with a marette wire connector. Best of all, it's practically invisible (see top photo).

It's a simple solution, and serves me well. As a bonus, nobody can see my lousy soldering.
Posted by JDL56 at 6:13 PM