The Craigellachie Kid, or the Boy in the Picture

It’s one of Canada’s most iconic photos—the driving of the Last Spike to mark the completion of the Canadian Pacific Railway on Nov. 7, 1885 at Craigellachie, B.C.

The famous photo shows a crowd gathered around CPR financier Donald Smith as he drives the fabled spike. But who is that boy peering at the camera from behind him?

His name is Edward Mallandaine, and he’s known in Canada as “the boy in the picture.” And now he’s also the subject of a book of the same name, by Ray Argyle.

Says Argyle of The Boy in the Picture: “The book recounts Edward's leaving home to volunteer for the North-West Rebellion, only to find the uprising quelled before he can reach the prairies. His real adventure begins when he catches on as a dispatch rider carrying mail and supplies by horseback across the unfinished gap of the railway in British Columbia’s Monashee Mountains. That puts him in the right time and place to be part of the driving of the Last Spike.”


On the day of the great occasion, 18 year-old Mallandaine squeezed his way to the front of the assembled crowd for a better view. In so doing, he not only watched history happen—he became part of it.

"Soon there remained but a single rail to be laid . . . The spectators, numbering probably 50 outside of the workmen, intently watched each spike as it was driven. Finally, there remained but one more spike to be driven. It was partly driven in and a hammer was given to Sir Donald Smith to drive it home.

“Everybody cheered; the locomotives whistled and shrieked; several short speeches were made; hands were shaken, and Major Rogers, the discoverer of the pass named after him, became so gleeful that he up-ended a huge tie and tried to mark the spot by the side of the track by sticking it in the ground."

Mallandaine’s story was first told in Pierre Berton’s book The Last Spike: The Great Railway 1881-1885. But Argyle knew him when he was a young boy and Mallandaine was an old man—Argyle’s family rented a house from Mallandaine in Creston, B.C., a mountain town he helped to found in 1889. The young Argyle was entertained by Mallandaine's stories of life on the wild Canadian frontier; The Boy in the Picture is the result.

Mallandaine—also known as the Craigellachie Kid, after the site of the Last Spike ceremony—died in 1949 at 82. But the photo lives on, and so, too, does his story in Argyle’s book. 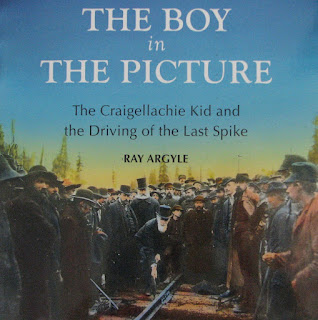