In early August I had a chance to visit one of my favorite places--the mountains in B.C. and Alberta. The trip included a drive south into Washington as far as the Columbia Gorge and along the eastern edge of the Cascades. Over the next few posts I'll share a few photos from those travels, beginning with the CPR Windermere Sub. in B.C.'s Columbia Valley.

The Windermere Sub. is the main route for CPR coal trains heading out of southeastern B.C. to Pacific Ocean ports. It runs from Fort Steele in the south to KC Junction, on the busy east-west Mountain Sub., in the north. The line features about 8-10 trains a day, including two wayfreights.

We stayed in Radium Hot Springs during our time in the valley. Our hotel was far from the tracks, but not so far I couldn't hear the trains blowing their horns at the crossing at the north end of the town. One afternoon I left the hotel as soon as I heard a train come into town, managing to take the photo below of an empty coal train headed back to the mines from an overlook along Highway 95. (Note mid-train helper.) 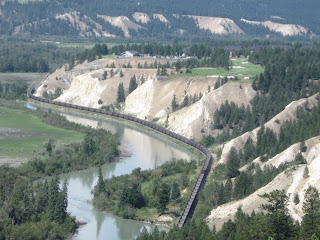 ﻿
I caught up with it at Windermere, where I was pleasantly surprised to find a loaded coal train headed north. (Of course, right about then the sun went behind the clouds, making for the dark shot below.) 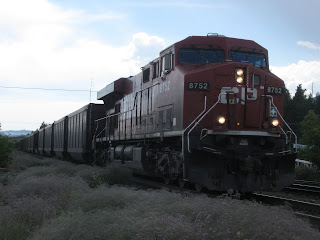 After a few shots, I drove back to Radium to catch the northbound at an overlook close to the tracks. The photography gods rarely smile on me, but this time, they did--the sun came out, and I had a great location as the train rounded the bend by the Columbia River. 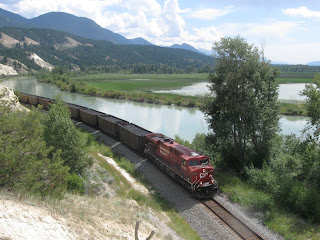 As it passed by below me, I grabbed a few more shots (below). 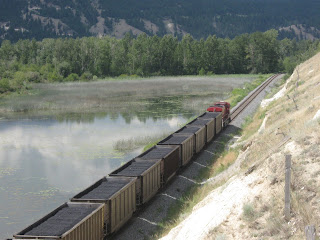 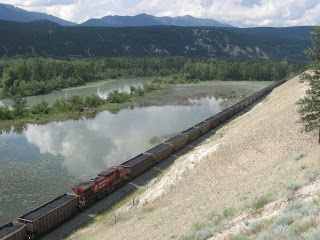 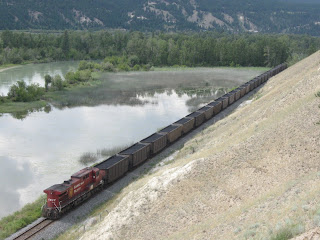 For me, there's nothing better than trains and mountains--and an understanding wife, who patiently waited with me trackside at several locations while I waited for trains.
Posted by JDL56 at 6:42 PM