Try Getting Around That Crossing! No way to get around the crossing gates here!

But some people feel the need to try beat an oncoming train by going around the gates. Governments around the world encourage drivers not to do this. But some drivers need more than encouragement, as in the photo above, taken in an unnamed European country.

The photo got me thinking; has anything like that been tried in North America? All I could find is what they are trying on Denton Road, about 30 miles west of Detroit in Wayne County. In 2007, it became the first location in the U.S. to be equipped with unique retractable barricades that serve as warning devices at a railroad crossing. 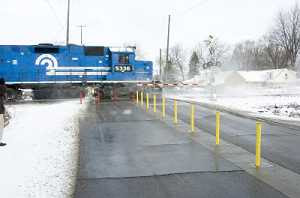 When the crossing gates go down, barriers rise
from the road.

How does it work? When the railway crossing gate arms go down, the barricades rise from the pavement to prevent drivers from driving around lowered arms. 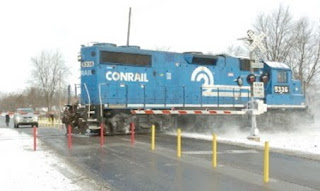 Another view of the barricades.
The project, which is still in the testing phase, encountered delays and was pulled offline in 2009. After repairs, it was put back into service in December, 2010. Testing will continue until spring or summer of 2011. 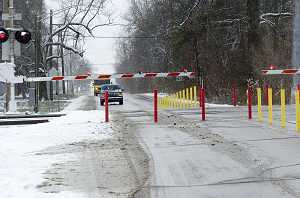