The Ghent Altarpiece, Model Railroading and Seeing With the Brain 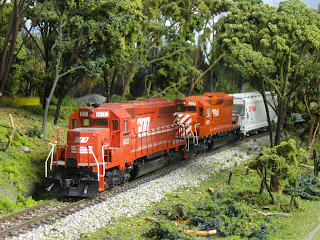 Does that forest really continue on into the background?

In an earlier post about photography, I wrote about how photographs conspire against our modelling by forcing us look at a single scene.

While some photos are amazing (see the amazing modelling and photography of Josef Brandl), much of the time they only serve to remind us that our model railroads are, in fact, models.

Model railroads, I wrote, are best viewed following a train around a layout. When we do that, our brains fill in the gaps, based on what we see in our peripheral vision.

Our brains tell us that the scene the train is passing through keeps going and going into the background; a closer inspection would reveal that it is only a cut-out from a magazine or calendar taped against a wall.

It’s all about illusion, in other words—sleight of hand, or sight, in this case, diverting our attention away from the areas that would spoil the fun and show us that it is, in fact, only a model.

Until now, that was my own theory. But now I have scientific and artistic support to back it up.

The famous Belgian Ghent Altarpiece, a series of paintings started by Hubert Van Eyck and completed in 1432 by his brother, Jan Van Eyck, is considered one of the first and finest examples of realism in art.

When created, it was a completely new way of painting that emphasized an exacting depiction of people and nature. 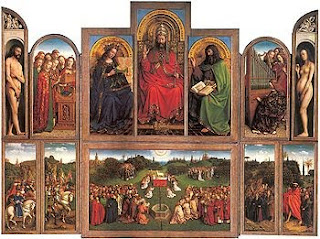 But is it really so exacting?

In the Nov. 29, 2010 New Yorker, Peter Schjeldahl writes about what he saw when he was able to examine the masterpiece close up.

Viewed from a normal viewing distance, the paintings sparkle with realism, he noted. But when viewed more closely, he could see that the images—which look so convincing from a few feet away—are really quite economical.

“Each of the hundreds of pearls that fringe Mary’s robes is just a dollop of gray hit with a spot of white," he writes "From a distance, it exudes pearlescence.” 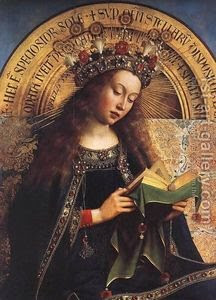 Mary from the Ghent Altarpiece.

The Van Eycks, he went on to say, "understood that realism doesn’t require verisimilitude, but only just enough visual cues to exploit the mind’s credulity.

"We know now, from brain science, that seeing is not a direct register of what meets our eyes but a fast mental construction that squares sensations with memory and desire: What we believe and wish reality to be."

Studies at the University of California confirms this. What the eye sends to the brain are outlines of the visual world, sketchy impressions that make our vivid visual experience all the more amazing.

"Even though we think we see the world so fully, what we are receiving is really just hints, edges in space and time," says Frank S. Werblin, professor of molecular and cell biology.

The brain interprets this sparse information, probably merging it with images from memory, to create the world we know, he added.

We see not just with our eyes, in other words, but also with our brains.

And what does this have to do with model railroading?

When we watch a train move past a backdrop on a layout, or through a gorgeous scene, our eyes send a message to our brains telling us that we are "seeing" trees and rocks and buildings and rivers, or that the scene continues into the distance, and it is filled with trees and fields and buildings or whatever.

Our brains, knowing what trees and fields and buildings and rivers look like, matches that information with images and memories of those things and—presto! We "see" them. as if they are really real.

Photography, like seeing the Ghent Altarpiece close up, enables us to focus closely on a scene and see that they are only photos on the wall, or models of trees, thus spoiling the effect.

At least, that's the way it looks to my unscientific brain. 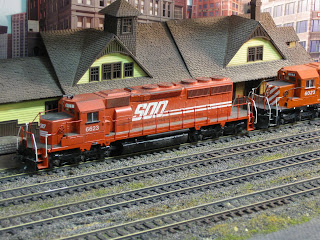 There are buildings behind the station . . . or are there?