An Old Story Often Told: The Gateway Western In Storage 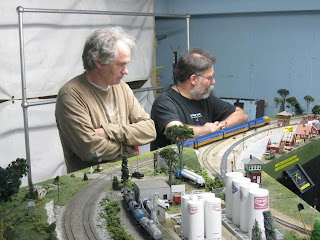 Larry Leavens and Gino Kost enjoy the action on
the Gateway Western.

It happened last month here in Winnipeg, when the Gateway Western, the layout that belongs to the Winnipeg Model Railroad Club, had to vacate its space in the basement of Gooch's Hobby Shop.

The reason? Gooch's is moving, and the new store won't have enough space for the Club's HO scale layout. The N-Trak layout also needs to find a new home.

The Gateway was in Gooch's for six years. It was a great location, and a great run.

Luckily, the 12 x 24 Gateway is sectional; Club members took it apart and moved it out of Gooch's basement in June. It is in storage while members look for a new home.

The Gateway itself has an interesting history. The original Gateway Western resided in the CN station on Main St. here in Winnipeg for many years. When the station was renovated in the 1990s, the layout was dismantled. It was resurrected as a portable layout by several Club members, including Jim Iredale, former owner of Ware House Hobbies in the city.

When Jim died, the others carried on, but it proved too much for the small group. The layout was sold to a local modeller, who never actually put it back together. When I discovered it was still in sections in his basement, I initiated a process for the Club to buy it back. It's been a great focal point for Club activity ever since.

But now it sits in storage, looking for new space. Let's hope it doesn't languish too long . . . . 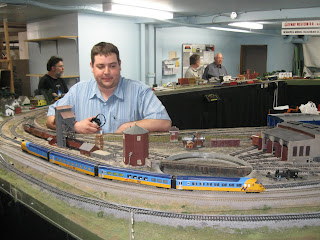 Jeff Keddy watches the Northlander pass the engine house.
Posted by JDL56 at 5:25 AM