Are You Embarrassed For Others To Know You Are A Model Railroader? 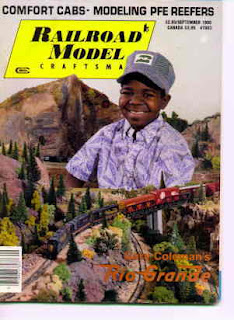 
Are you embarrassed for others to know you are a model railroader?

That question came up on the Canadian Model Trains forum on Yahoo! following the death of actor Gary Coleman.

Coleman, as many know, was a model railroader (his layout appeared in the September, 1990 issue of Railroad Model Craftsman; see above). After his death, a number of writers noted his involvement in the hobby, a few in a smirking kind of manner.

The worst was Lynn Crosbie of Canada’sw national newspaper, the Globe and Mail. After noting aspects of Coleman’s tragic and difficult life, she wrote: “There is not much glamour or intrigue available in Coleman's story—in working stiff jobs, stunt-cast acting work, or isolation (like forlorn men everywhere Coleman had an abiding interest in model trains).”

That comment sparked a lot of discussion on the forum, with most dismissing the writer’s lack of knowledge about model railroading and the people who enjoy it. (“Whatchu talkin’ about forlorn, Crosbie?”) But it also raised some interesting observations about how others see our hobby—and how some of us prefer not to talk about being model railroaders in the “outside” world.

I know that’s true for me. I’m not embarrassed to be a model railroader—heck, look at this blog. But I’m also careful who I tell about it; and in what circumstances.

As a semi-public figure—I’m a columnist for my local newspaper, writing about religion and international relief and development issues—I wonder if people might dismiss my writing about these serious subjects if they thought I “played with trains.”

And that is how many see it. And they’re not wrong, in one sense; it is “play,” insofar as it isn’t work. We know it’s more than that, of course: It’s research and construction and modeling and creativity and imagination.


But, for many, trains are things you played with as a kid. Once you grow up, you play with “real” toys like boats, snow machines, motorcycles and SUVs, to name a few.

Then there’s the media; when the subject of hobbies and collecting comes up, it often is about people who cross the line from healthy pastime to ruinous compulsion or obsession—think of a movie like Vinyl, about obsessive record collectors.
It’s apparently worse in England, as one British journalist—and a model railroader—noted in a humorous way.

“You can see them in the newsagent's—shifty, furtive, eyes glancing to the left and to the right, in case anyone they know might see them,” he wrote.

“These men—and they are nearly always men—then slither over to the specialist magazine stands.

“With a quick movement, the required publication is grabbed and the till approached.

“Sometimes, the shame is too great; a disguise is needed. So another magazine is taken, something wholesome and respectable - anything will do - into the pages of which the offending publication can be slid.

"Then, at the till, the final hurdle, the hope that the cashier will not, as in that Woody Allen film, bark out the name of the publication across the shop floor.

“‘Hobby’, ‘Railways’ and ‘models’—are there any three more shameful words in the English language?”
American story teller Garrison Keillor also used humour to illustrate the challenge in a telling way:

"I, for example, would dearly love to receive a model train layout similar to the one of my childhood, which rusted and decayed," he wrote in an essay on the dangers of Christmas.

"I remind myself every year not to want it too much, but I do, and I never get it. A man my age can't simply walk into a store and buy a model train set for himself; people would talk, people would chuckle behind his back, and one day he'd come home to find an attorney sitting smiling in the living room, who would explain to him in easy-to-understand terms, using simple declarative sentences, why his financial affairs will hereafter be managed by his nephew Vince."

Again, I’m not embarrassed to be a model railroader. I will talk about it with others, if it’s appropriate to do so. But I usually wait to see if something like the topic of hobbies or interests comes up before mentioning it.

What about you: Are you careful who you tell about being a model railroader? Or don't you care who knows you “play with trains”?
Posted by JDL56 at 8:32 PM