Do You Model Graffiti?

Do you model graffiti?

That simple question on the Atlas HO forum turned into a loud, boisterous and nasty discussion that eventually led to the thread being locked. When it comes to this form of urban "art," people sure have lots of opinions!

No matter what you think about graffiti, the fact is that if you want to plausibly model the modern scene, your rolling stock has to be tagged. Actually, tagging is just one form of graffiti, and the lowest form, at that. Other forms include "pieces" (as in "masterpieces), signatures and stencils.

(In some cities, there are graffiti "crews"—a group of "artists" who will tag a number of cars together.) 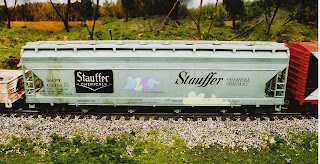 Since I model the early to mid-1990s, I need to have graffiti on some of my cars. Some of my cars have factory-applied decals, and others have after-market decals. But most I did myself with gel pens.

Gel pens are pens that allow large amounts of ink to flow freely when the tip is depressed on a writing surface. They can be bought at any office supply store.

Using gel pens is sort of like painting, but with a pen. I use it to create words, shapes, characters and squiggles—anything that looks like the prototype.

I also use a silver gel pen to simulate aluminum windows on locomotive side windows.

Many people would sooner give up the hobby than deface their rolling stock. Not me; I want my layout to look gritty and weathered, just like the real thing. 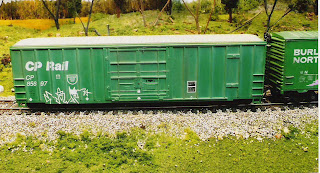