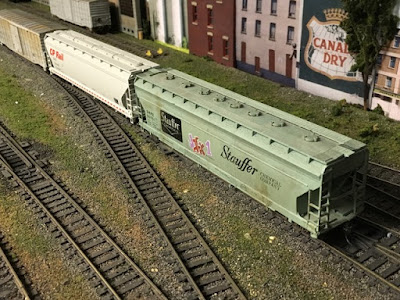 2017 marks 30 years since I got back into model railroading.

I had liked trains my whole life up to that point, starting with Lionel as a kid before moving to Tri-Ang, HO, and then N scale.

I sold my N scale stuff in 1976 before heading off to university and a more unsettled life that took me to Manitoba, B.C., Europe and Texas.

It was in Texas, in 1987, 11 years later, when I got back into the hobby. I had $50 to spend on some trains before returning to Manitoba.

I went to the late and great Bobbye Hall's model railroad store in Dallas, where I lived. (It was described in 2001 by the Dallas Observer as "the best hobby house owned by a 92-year-old woman who still comes to work every morning at 9.") 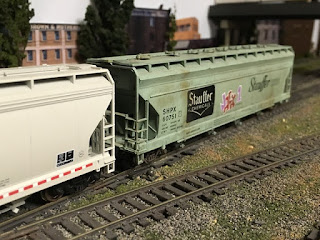 I bought a locomotive and eight or nine freight cars—yes, for only $50 (you could do that back then).

Of those items, only one piece of rolling stock remains on the M & M Sub.: SHPX 60751—Stauffer Chemical Company. The others were sold or "scrapped."

In the Greek alphabet, alpha is the first letter, and omega is the last one. So SHPX 6071 was among the first of my current model railroad possessions, and also the last from that time. And it is also the last in line on DUL-WPG MX (Duluth-Winnipeg Mixed) on this July day, 30 years later.