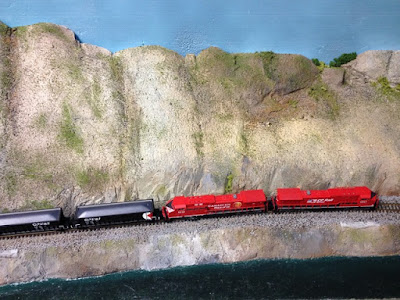 And so it is done—the Thompson River canyon memorial layout is finished.

It took a year to finish both sides. I thought I would get it done quicker but, you know—life.

Actually, I’m sort of sorry it is finished now. Unfinished, it gave me comfort—it was always there, waiting for me to do some work on it.

But with it now done, and my HO layout long done (after tearing down a third of it and starting over), I don’t have any new model railroad projects. I feel undone, to be honest. 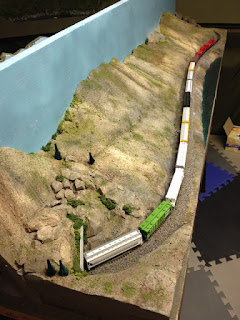 But it was a fun project while it lasted. And meaningful, as through the construction I recalled my brother-in-law Ken Epp, who died in 2014.

As I noted in earlier posts about this project, after building a great four-level HO scale layout (the Cougar River Sub.) Ken had downsized and moved to a condo.

His next goal was to build an N scale version of his favourite railfanning area: The Thompson River canyon.

Unfortunately, cancer took him at age 59 before he could complete that dream. Instead, I received the N scale stuff he had accumulated from his family and built it for him, and in his memory. 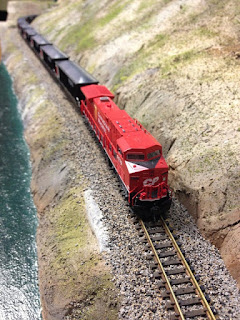 It’s not big—just a 2 by 7 on a hollow core door. But I hope it catches the spirit of the canyon that he loved. (And where his ashes are scattered—by the railway tracks—at his request.)

One side of the small layout features the steep, rugged part of the canyon where snow and rock sheds are needed to protect the trains.

The other side features the less steep and more arid part of the canyon.

As I noted in my earlier posts about the most recently-completed part of the layout, I mixed grey, various shades of brown, tan, black and white craft paints to achieve the colourations.

The trick to this kind of believable scenery (as on the other side), is to vary the colours, making sure to blend them together near the edges.

Everything on the layout is extruded Styrofoam or cardstock (for the tunnel portals and rock sheds). This includes the boulders, which are cut to shape.

To cover holes and cracks, I glued pieces of foliage between the boulders and places where it was too hard to paint near the backdrop (which is just a one-inch piece of Styrofoam spray painted blue). I was careful not to use too much, since this is a dry area.

The ballast is my own special blend of grey, cinders and buff. This prevents it from looking too uniform. I also painted the track brown. 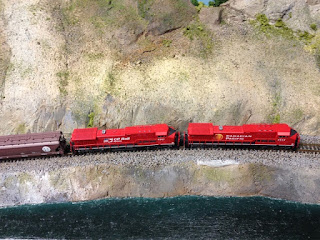 The water is a mix of deep river green and black green—the lighter colour indicating where the river is shallower near the edge. I used matt medium to make it glossy.

And that’s it—a simple but, I hope, convincing representation of an area that was close to Ken’s heart. The completed layout will be formally unveiled at the Sept. 24-25 Manitoba Mega Train show.

For some, it may be too simple: Just a train going around in a loop. But I actually find it very relaxing, sort of like watching fish in an aquarium.


Click here to see all the posts about building this layout, including two videos. 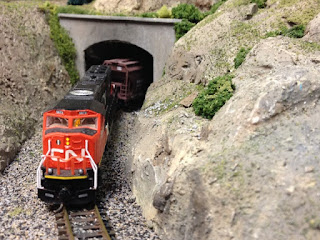 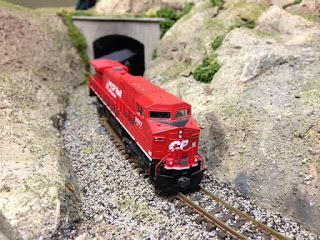 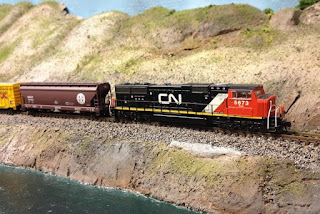 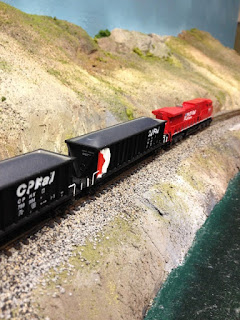