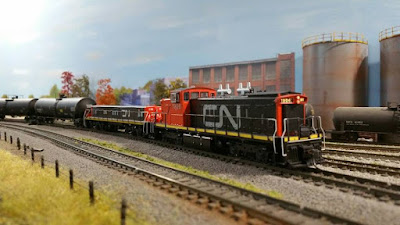 The HO scale layout, which is its own 16 by 20 foot building, represents Canadian National in Quebec in 1985.

Why that place and year? That’s where Stephane grew up and where he watched trains as a young boy. 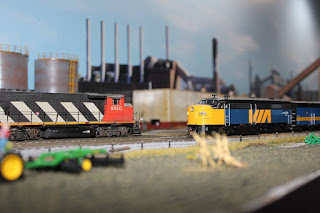 “When I was young we lived near the station at L'Assomption, Québec, and was always at the station,” he says. “I am modelling my good memories of that time.”

Although centred on a real Canadian location, the layout is proto-freelanced. Stephane does use real town names and train numbers. 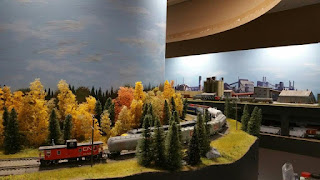 The point-to-point layout has helix on the center peninsula, which takes trains down to a ten-track staging yard representing Montreal to the west and Garneau to the east. There is also two tracks representing a branchline to Riviere des Prairies.

Track is Atlas code 100; the turnouts are from Peco and Shinohara. DCC control is provided by NCE.

Industries on the layout include a cement plant, co-op grain elevator, lumber distributor, propane dealer, warehouse and team tracks. There is also an interchange with CP Rail. 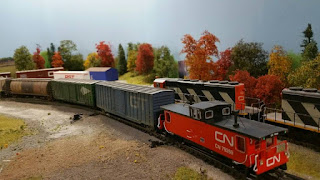 Stephane’s scenery is made from red rosin paper and cardboard strips (a method promoted by Howard Zane). He also uses extruded Styrofoam and floral Styrofoam. Ground cover is sculptamold covered by various kinds of static grass and ground foam.

The backdrops come from King Mills and Realistic Backgrounds, together with one made by his wife by using panoramic photos from the area. 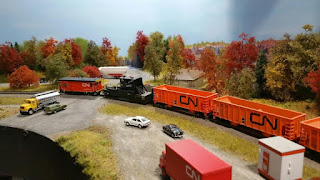 She stitches them together using Photoshop, prints them on a 52-inch laser printer and adheres then to vinyl before placing the backdrops on the layout.

Stephane’s roads are inspired by Mike Confalone; he screens rock dust into a bucket, then applies it to the road and fixes it with a mixture of white glue and water. After it dries, he smooths the surface with sandpaper (120 grit) and paints it with acrylic craft paint from Walmart. When dry, he adds lines and then weathering. 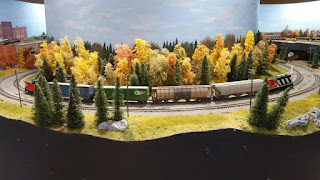 His deciduous trees are from scenic express. He paints the trunks camouflage brown and uses ground foam for the leaves. His evergreens are hand-made from 18-gauge wire and twisted rope.

As for his favorite scenes, he thinks it is the cement plant—it’s nine feet long—and the co-op grain elevator.

Oh, and the layout also features a model of his actual house, although the couple goodbye in the driveway are not him and his wife. (And the man peeing behind a tree isn’t anyone he knows, either.) 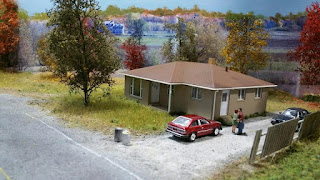 This fall he plans to begin operating sessions with friends. The sessions will be helped by another friend who was a CN engineer on the real-life Joliette Sub. “He will be able to tell me me all the train movements and car consists of this time period,” Stephane says. 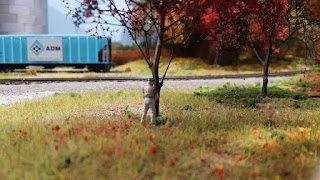 Stephane has been a model railroader for almost 45 years, and a railroader for the last 30 years, working for CN and for VIA Rail. “I think trains are in my blood,” he says. 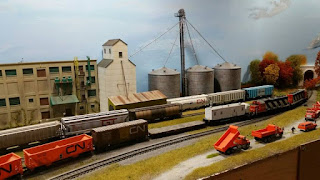 With help from them, and with his own skills, Stephane has created a Great Canadian Model Railroad of his own.

All photos by Stephane. 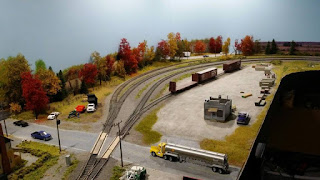 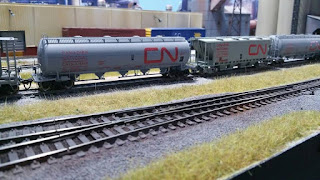 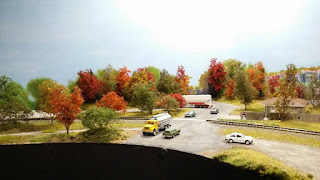 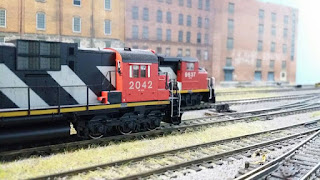 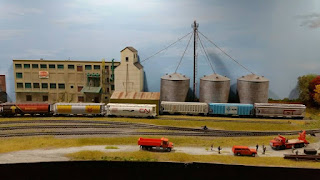 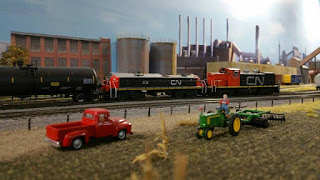