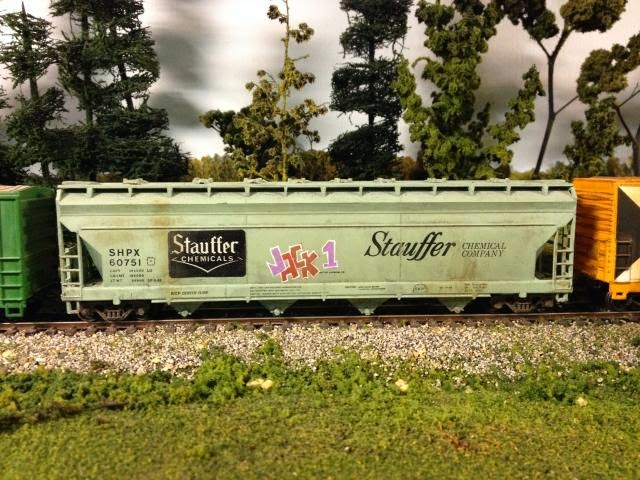 The mixed freight from Duluth to Winnipeg was rolling by between Nance and Turney when I spotted it: SHPX 60751--Stauffer Chemical Company.

It took me back to 1987, the year I returned to the hobby after an 11-year absence. That's when I bought this car.

I was living in Dallas, TX at the time, where my wife was at grad school. Since I couldn't work in the U.S. (being a Canadian), I volunteered.

We didn't have much money, in other words.

Some friends gave me some cash as a parting gift before we returned home to Canada. I knew exactly what to do with it. I headed to the late and great Bobbye Hall's (described in 2001 by the Dallas Observer as "the best hobby house owned by a 92-year-old woman who still comes to work every morning at 9.")

I bought a locomotive and eight or nine freight cars. Of those items, only the Stauffer car remains on the layout. The others were sold or "scrapped."

The car looks like it's been around for awhile, with graffiti and weathering. No matter; when I see it, it takes me back to a time when I was younger and just starting back in the hobby.

What's the oldest piece of rolling stock operating on your layout?
Posted by JDL56 at 5:25 PM