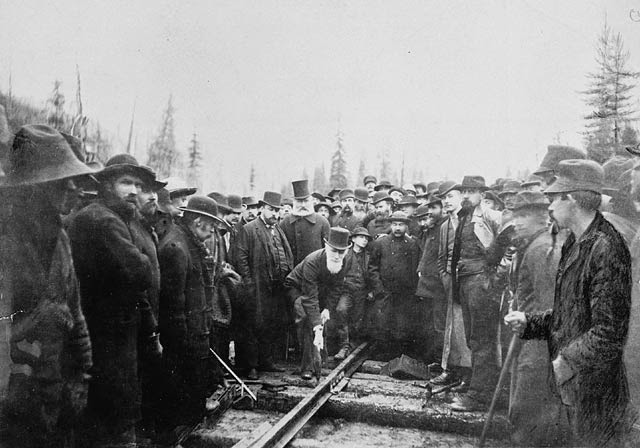 It’s National Railway Day in Canada, not that many people know. I didn’t, until I saw it on the OK the PK blog.

National Railway Day marks this date, in 1885, when the last spike was driven in the CPR transcontinental mainline at Craigellachie, B.C.

I wrote about the ceremony in 2012, when I posted an article about The Boy in thePicture. That boy was Edward Mallandaine, also known as the “Craigellachie Kid.”

That’s Edward in the photo above, peering around the shoulder of Donald Smith, a director of the CPR who is driving that famous last spike.

And whatever happened to that last spike? It has been shrouded in mystery. There were actually two of them. Smith bent the first one with his first blow. It was removed and later cut into pieces as a souvenir.

The second one was also removed after the ceremony. It disappeared. It's location was a mystery until 2012, when it was reported to be in a safety deposit box in a bank in Winnipeg.

Somewhere along the way, the spike was fashioned into the handle of a carving knife and silver plated to enhance its ceremonial appearance. Read more about the history of the last spike in the Globe and Mail.

As for me, the CP Rail M & M Sub. never had a last spike ceremony. Since I kept putting down and tearing up track, I was never sure where the last spike might be. So I held a “last ballast” ceremony when I laid the last ballast on the mainline.

Not as dramatic as a last spike ceremony, but it worked for me.
Posted by JDL56 at 11:47 AM