Nothing lasts forever—not model railroads, or the people who built them.

In 2009, my brother-in-law, Ken Epp dismantled his HO scale Cougar River Subdivision, due to a planned move to a condo. On Oct. 14, Ken passed away, due to cancer.

The Cougar River Sub. was one of the largest layouts in Winnipeg—maybe the largest at that time. Ken hosted many open houses, and the layout was open for several conventions. It was also featured on local and national TV.


Together, we also organized the annual Winnipeg Model Railroad Club's annual train show, starting in the early 1990s. Our first show was in our church's  basement; thereafter, it was held at a local high school. I worked with Ken on the show until about five years ago, and he let it go three years ago.

Before Ken died, I had a chance to talk with him about his interest in trains. I asked him where that interest came from.


“Maybe it started when I was a child," he said. "I remember standing up in my crib in Coldwater, Ont. when the 12:30 mail train came along. But how does it grow and take hold? I don’t know. My love for trains just grew somehow.”

Ken never intended to build a huge layout. “I just started and it grew.” Taking it down wasn’t easy. “I took it down slowly, in pieces. It took me three years to tear down the canyon scene.”

Taking down the layout was similar to how Ken approached the end of his life. “Nothing is permanent, including me,” he said. “That is reality of life.”

Looking back, Ken fondly recalled his many train trips on VIA and Amtrak—over 180,000 miles by train in all. (Yes, he kept a record of each and every one.)

His many times taking the train made him a bit of an informal expert, and he frequently found himself telling other passengers about the terrain they were riding through or providing information about railroading in Canada.

Ken’s favorite place to ride a train was in the dome car of The Canadian.

“I have to say that sitting in the dome car at night as the train goes across the Canadian Shield, watching the signals get knocked down, seeing the northern lights and the snow on the trees—I don’t know if what heaven is like, but for me, that’s heaven,” he said.

As for me, I was lucky to have a model railroader for a brother-in-law. In fact, my wife joked that I only married her because her brother liked trains. It wasn't true; we only discovered our mutual interest after the wedding. But it was a most fortunate discovery, and we spent many happy hours trackside or working on each other's layouts.

Of his layout itself, it featured at 530-foot loop-to-loop three-level mainline that travelled through the rec room, spare bedroom, small office space, washroom and other basement areas.


Scenically, the layout featured mountain, prairie and Canadian shield scenes, including a concrete snow shed from the Thompson River Canyon.

In terms of era and railway, it featured both CN and CP Rail, with classic CPR maroon and grey running beside CN white, orange and black.

Train lengths were 25-30 cars, and four trains could be run at a time. It took about 25 minutes for a train to run between the lower and upper staging yards. 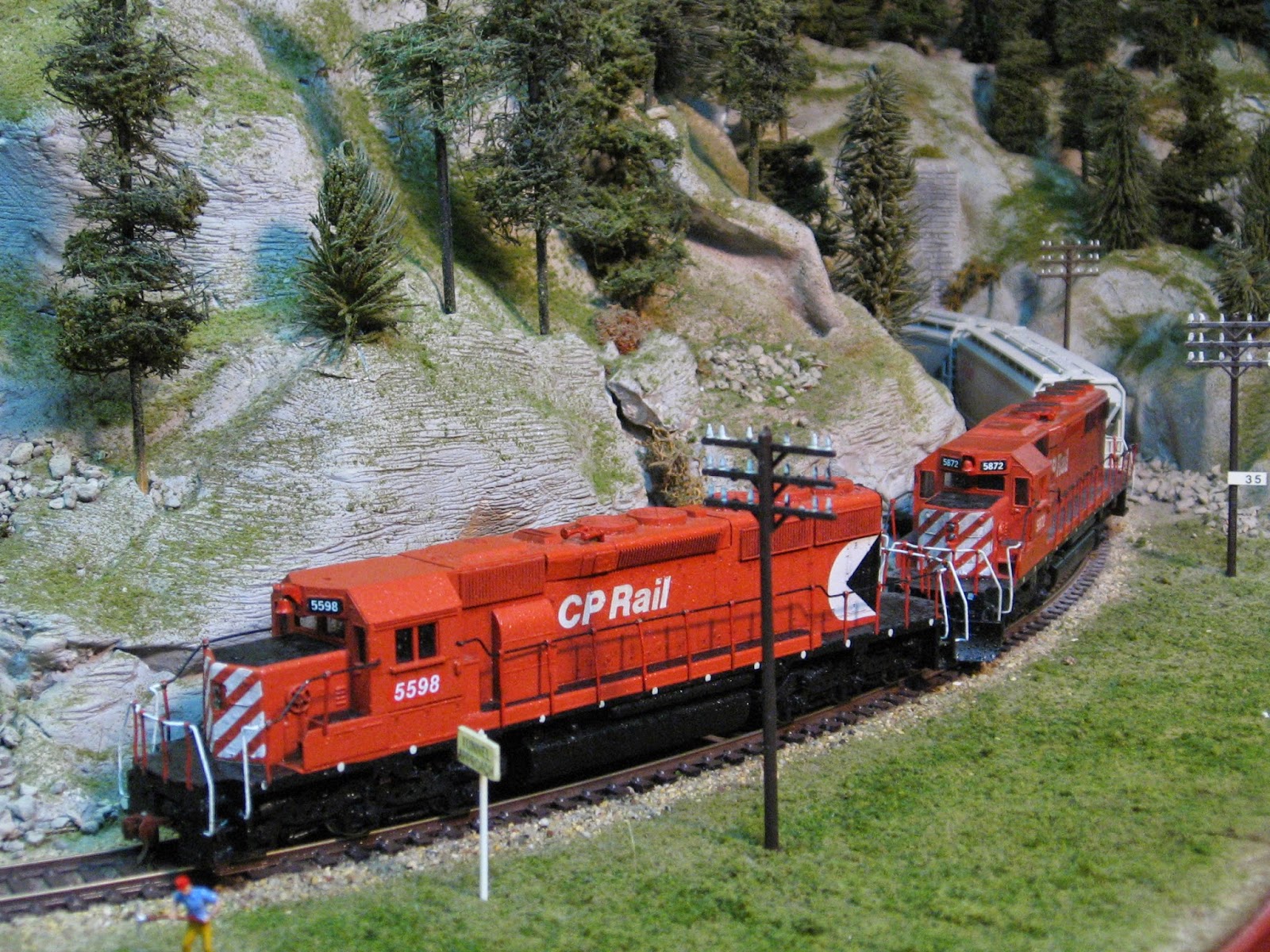 All train movements were controlled by a dispatcher, who was located in a small specially-built room that featured a seat from a real CN SD40-2; 40 operating signals and radios helped operators move their trains along the line.

In 2004 another friend, David R. Dyck, succumbed to cancer. Ken, Dave and I were church and model railroad friends, and took some railfan trips together. After Dave learned that his cancer was terminal, we took one last railfan trip; the photo below is from that trip. Now both Dave and Ken are gone.

To remember them, I have made special commemorative patched cars carrying their initials, age and date of death. 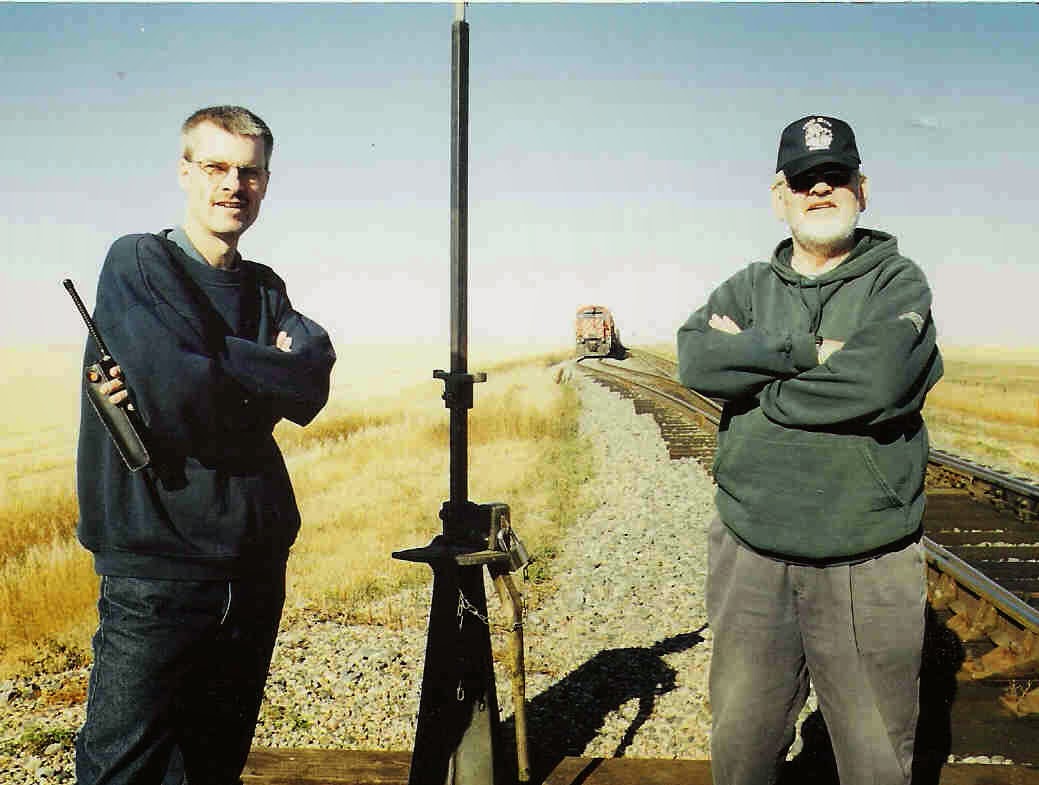 Rest in Peace, Ken. It's hard to believe you aren't with us any longer.

Find links to videos of the Cougar River Sub. here.
Posted by JDL56 at 2:28 PM