Back in 2010, I wondered what the oldest home layout in my hometown of Winnipeg was. 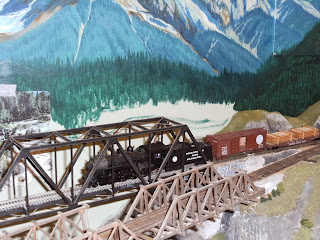 I didn't mention the owner's name, but it was Don McKinnon. He started his HO scale Malamute & Klondike layout in 1950.

Over the years, he changed things and added sections, but the layout still occupied the same place in his basement, with original elements intact.


Don died earlier this year; this summer, his layout was dismantled. The oldest layout, at 63 years, is gone.

A piece of it lives on on the M & M Sub. I won't run it in regular service; it's too old for my early 1990s time frame. But it will be a memory for me of Don, and the Malamute & Klondike.

Now the oldest layout in Winnipeg is one that was started in 1968. The next oldest was begun in 1969. 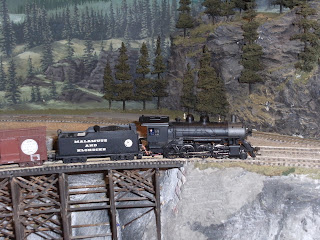 Compared to them, the Manitoba & Minnesota Subdivision is pretty young. Next year it will mark its 20th anniversary.

As I noted in that earlier blog, we will likely never see layouts that old again. Today, people are much more mobile; the chances that Canadians will stay in the same house for 65 years, as Don did, are remote. 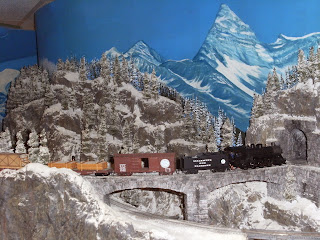 But here's to the Malamute & Klondike, now gone like so many others, but living on in memory.

Thanks to Don's friend Marvin Fetch for the photos.
Posted by JDL56 at 8:25 PM