As many know, Tim Hortons is pretty much synonymous with being Canadian. The coffee and donut chain has even introduced words into the Canadian lexicon: Double-double, Timmies, Timbits, roll up to the rim. For many in Canada, the day hasn't started until after the first cup of Tim Hortons coffee.

So it's no surprise that some model railroaders might want to include a Tim Hortons restaurant on a layout, like the modellers who belong to the La Ba Ja club in Edmonton, Alberta. Their portable layout features a Tims, along with a collection of police cars in the parking lot. (Some stereotypes are international, it seems.) 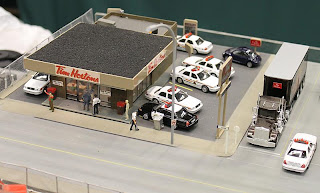 A modeller in the U.S. went one step further, decalling two pieces of rolling stock with the Tim Hortons logo. George, who lives in , became a Tims fans during trips to