Getting (re)Started in Model Railroading 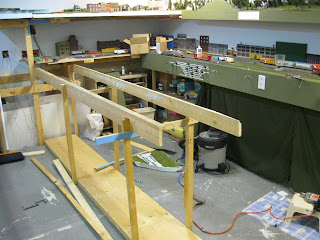 Those who have followed this blog for a while know that, for some time, the CP Rail Manitoba & Minnesota Sub. has been finished.

(I know, I know--a model railroad is never "finished." But the M & M Sub. was done, as far as I was concerned--there were no more tracks to be laid and no more scenery to complete.)

So, what did I do? I tore down the middle penninsula, with the idea of starting something new in its place.

The big tear-down happened about eleven months ago. I thought I might get started on the new section in spring, but that didn't happen. All too soon, summer and fall came and went.


It wasn't just a matter of being busy--although I was. It was also a matter of energy; for some reason, I just found it hard to go down into the train room to start building again.

This was a new feeling for me. For both of my layouts (The CP Rail Grimm Valley Sub., from 1987-94, and the present layout, started in 1994), building benchwork, laying track or making scenery was never a problem--I couldn't wait to do it.

But this time it was different. I don't know why, exactly--maybe because I'm older, or perhaps because I've done it all before. Whatever it was, I developed a new appreciation for those who want to build a layout, but never have--getting started can be hard.

But all that changed last week. I finally got downstairs and started the new benchwork; the photos show my progress after a couple of hours. It felt good!

As with the other parts of the layout, I'm basically building shelves for stuff with trains on top. The bottom shelf is in; the next level will be added soon. Unlike before, this time the penninsula will only be about two feet wide, to accomodate my new office. It will also only be one level, to make the room feel bigger.

All told, the new construction will add about 35 feet of mainline track, and give me something to do during the coming winter. (An important consideration up here in Canada!)

Now I have a different problem, though: I don't want to rush it! I'd like to let it linger, so that I don't once again run out of something to do. 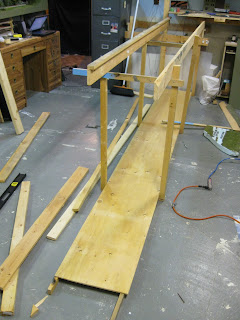