One of Ron  Loewen's favorite places is Pennsylvania in the fall. So when it came time for the Manitoban to build a layout, that state and time of year were natural choices.

Ron's three-rail layout fills the second floor of his two-car garage; Ron uses MTH DCS to run four trains at time. He like nothing better after a day of work than sitting back and watching trains run around the layout.

Other features include a six-foot long bridge, tunnels, smoke, sound and a camera on a flatcar that allows visitors to view trains from an engineer's perspective on a TV screen in the layout room.

Ron doesn't specialize in any railroad--whatever looks good is fine with him. He does have a fondness for billboard reefers, though.

I visited Ron just before an open house, when he was getting the layout ready for visitors; see photos below. A video of the layout can be found on my CP Rail Manitoba & Minnesota YouTube channel by clicking here. 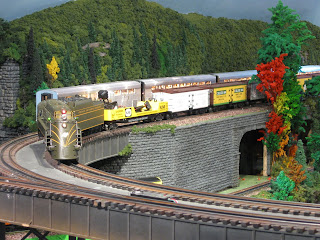 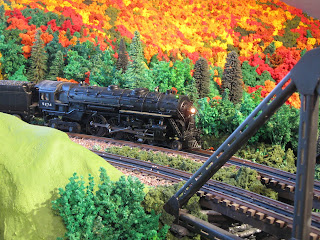 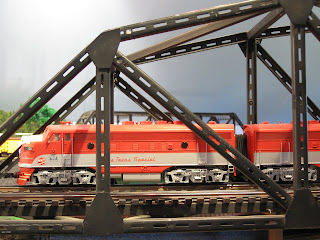