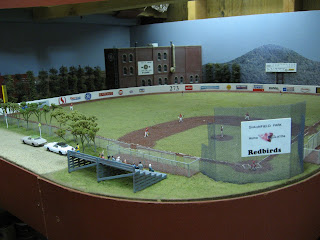 The boys of summer are back!

They've been back in the National and American leagues for some time already, but the Winnipeg Goldeyes of the American Association had their home opener this past week.

I've seen baseball modelled on a few layouts, but never like how my brother-in-law Ken did it on his now-dismantled Cougar River Subdivision.

Ken managed to build an almost regulation size diamond in a corner of the layout. The mainline on this, the lower level of his three-level layout, snuck off behind the outfield and the building on the right. (Which also disguised the hole in the backdrop.)

During our long northern winters, it was a visual promise that summer would, one day, return, and with it would come baseball.

But back to the Goldeyes: A night at the ol' ballpark is just fine all by itself, but a visit to Can West Global Park, home of the Goldeyes, is special for another reason—trains! The CN transcontinental main line runs past left field (after crossing the Red River), and around the park. A passing train is a pleasant addition to an already perfect evening or afternoon. 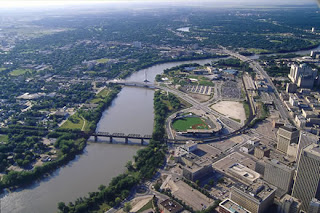