The Cougar River Subdivision—Gone, But Not Forgotten 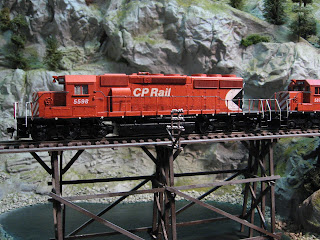 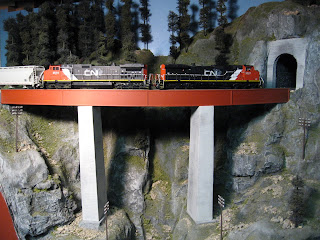 The Cougar River Subdivision is no more.

In September, Ken Epp dismantled his signature HO-scale layout in Winnipeg, Manitoba. First to go was the upper staging yard, followed by the helix. More bits and pieces were taken down over the next few weeks.

Over the course of about a month, a layout that took over 20 years to build was gone.

Of course, this isn’t unusual—nothing lasts forever, including model railroads. (See my blog post, "Of Model Railroads and Sand Mandalas.") But it still was sad to see it go.

For me, the end of the Cougar River Subdivision was a bit closer to home—Ken is my brother-in-law, and it was my privilege to help him build parts of it. It helped cement our relationship, and provided material for conversation at many a family gathering.

What made the layout special wasn’t just its size—although, with a 530-foot mainline on three decks, it was large. What made is unique was how Ken put all that layout into a 1,200 square foot basement, but still provided space for the rest of his family.

By running the layout along the walls, Ken left room for a recreation room, pantry, bedroom and work area. Also, by keeping the benchwork narrow—most of lower level was about 10-12 inches wide, with the upper levels only 6-8 inches in width—the layout didn’t intrude unduly into the living areas.

The loop-to-loop layout, with its nine-scale mile run, began in a lower staging yard and ran around the outer walls of the basement. It then used a helix in the pantry to climb to the second level, which followed the first level around the walls. It then entered the pantry a second time to climb to the third level, which ran only around part of the basement before ending in the upper staging area.

And when I say “upper,” I mean upper—the upper staging tracks were suspended from the ceiling in the furnace/laundry area, 79 inches above the floor. Together the two six-track upper and lower staging yards could hold about 450 cars.

Altogether, it took about 25 minutes for a train unimpeded by meets or switching duties to traverse the layout from the lower staging yard to the upper.

Scenically, the layout didn’t represent any one area of Canada, but rather included mountain, prairie and Canadian shield scenes. Trains were all Canadian, and reflected a mixture of eras from the 1950s to now.

Train lengths were 25-30 cars, and four trains could be run at a time on the DC-controlled layout. All movements were controlled by a dispatcher, who was located in a small specially-built room underneath a mountain scene. Operators simply watched the signals and stayed in touch with the dispatcher via two-way radios.

And now the big question: Why was the layout dismantled? It was a combination of things: Ken and his wife are thinking about moving, and want to prepare the house for sale. But it was also because he was ready for a new challenge—N scale, anyone?

The Cougar River Subdivision will be featured in an upcoming issue of Canadian Railway Modeller. You can also see videos of the layout by clicking on the links below: