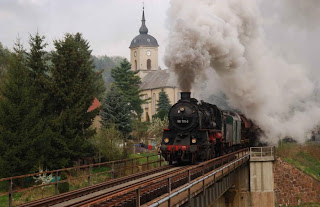 This being Good Friday/Easter and Passover, my thoughts turn to the similarities between religion and model railroading.

For some, of course, model railroading is a religion. They worship at the altar of St. John of Allen, St. John of Armstrong, St. Tony of Koester and St. William of Walthers.

Here are a few similarities that occur to me (as someone in the Christian tradition).

Denominations. There are over 40,000 of them in Christianity. There are fewer in model railroading, but for some the differences are just as important.

Dissent. Just like in the Roman Catholic Church, not everyone agrees with the Pope. Ditto for model railroading—not everyone likes the NMRA.

Protest. Following the 2003 NMRA convention in Toronto (the infamous SARS convention), a break-away group formed: The Canadian Association of Railway Modellers. It wasn’t like Luther nailing the 95 theses to the church door in Wittenberg, but CARM was created as an alternative to the NMRA for Canadians. It's sort of like Protestants and Catholics in the 16th century, but without all the wars.

Sacred spaces. The Mormon temple in Salt Lake City, the Ganges in India, the Western Wall in Jersualem, Mecca—just a few of the sacred spaces for religious groups. For model railroaders, sacred spaces would include the Spiral Tunnels in B.C., the Tehachapi Loop in California, Grand Central Station in New York, and dozens of other places to watch trains.

Meeting places. We used to call these hobby shops. You remember hobby shops? They were places where model railroaders would gather for fellowship on a regular basis, often on a Saturday morning, and then to receive sacraments like a pack of Kadee couplers, Woodland Scenics ballast or the latest magazine.

Mystery. How does DCC work, anyway? Does anyone really know? Or do we just pray and hope that those mysterious unseen waves of information move like their supposed to?

Persecution. Don’t think it exists? Then you don’t know any N scalers.

Evangelism. Religions that don’t want to die need to seek new converts. So does model railroading. We keep hearing that the hobby will die if we don’t attract more young people. Magazines and the NMRA keep encouraging us to reach out.

Fights. What’s a church or synagogue without a fight? I’ve seem some dandies in model railroad clubs, often over the smallest things—just like in church.

Holy Scriptures. Model Railroader, Railroad Model Craftsman, N Scale, Canadian Railway Modeller—each scripture has its followers, and detractors. Some think each word written in them is the Gospel truth, others see them as inspirational guides, a few think it is all made up.

And finally, the apocalypse. What’s a religion without a good end-of-the-world scenario? Ditto for model railroading. For some, it’s the end of kits and the take-over of Ready-To-Run. For others, it’s the prices, the lack of youth in the hobby, rising prices, or limited runs. All portend the end of the hobby—if you believe they are right.