A Model Railroader Walks Into a Bar . . .


And finds a layout inside.

No, this isn't a joke. Such a bar really exists—in Japan. It’s called the Bar Ginza Panorama Shibuya Branch in Tokyo. The bar caters to model railroaders; customers are able to bring their own trains to run on the tracks. See photos below. 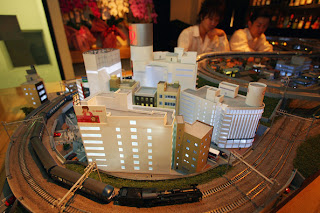 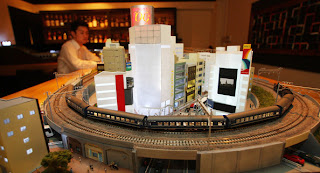 Here in Winnipeg, where I live, we have the Sushi Train, a restaurant that uses a G scale train to deliver food to patrons. 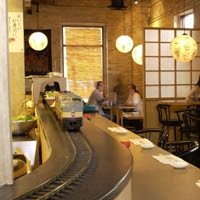 Other cities have something similar; as in the photo below. 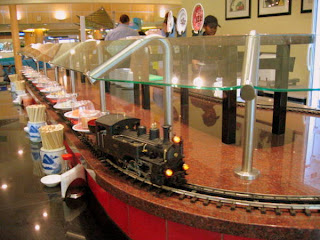 Since the layout in the bar looks like it's a loop, it brings a whole new meaning to the phrase: "I think I'll have another round."

You can view the Japanese website for the bar here.

Also click here to read about Zientek's hobby shop in Chicago, which used to be both a bar and a model train store. (The bar is long gone, but the hobby shop remains.)

Thanks to detroitterminal, who posted a note about the model railroader’s bar on the Atlas HO forum.
Posted by JDL56 at 1:11 PM