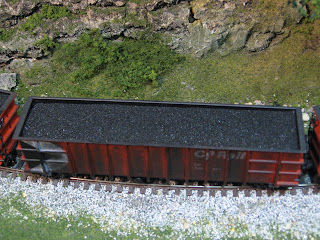 Looking for an easy way to make good-looking coal loads? You might be sleeping on it. At least, that's what I was doing. For a long time we used a foam mattress topper—a piece of foam that went on top of the regular mattress. 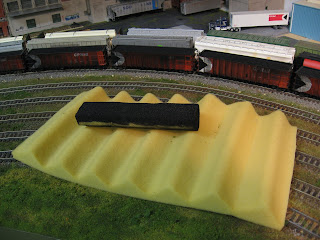 The foam mattress topper and a load. Loaded
cars in the background.
Eventually, like most things, it wore out. I was going to throw it out when I thought: I could make coal loads out of this!

Of course, I wasn’t the first person to think of using foam to make coal loads. Locally, my friend and fellow modeler Ron Einarson had written about making coal out of foam. When I saw the mattress topper, I thought of his article and knew I could do the same thing. 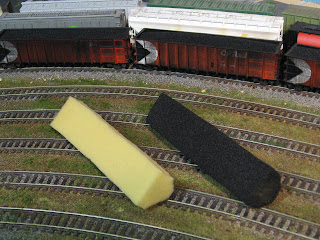 Unpainted and painted coal loads.
To make the loads, I cut the foam to fit my MDC bathtub gondolas. (I know these aren’t prototypical; the InterMountain coal cars would be much better. I just haven’t been able to persuade myself to spring for the string of 20 hoppers I’d need for my unit train.) Since I model the modern era, my coal loads needed to be flat, which makes this process even easier.

After cutting out the loads, I spray painted them glossy black. When dry, I popped them into the cars. Done!

I used mattress foam, but any piece of one-inch thick foam would do. 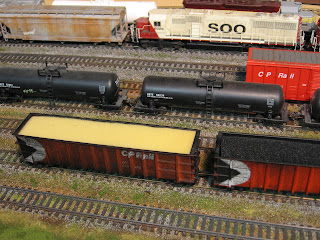 Unpainted and painted loads in cars.

As a bonus, these loads are easily removable. On the CP Rail Manitoba & Minnesota Sub., I run them loaded from B.C. to power plants in the east and empty going back. 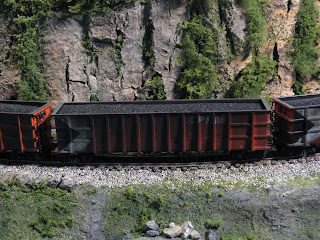