Thompson River Canyon: On Display for the First Time at the Manitoba Mega Train Show

It was a successful first day at the Manitoba Mega Train Show, where I unveiled the Thompson River Canyon portable layout.

Even though the weather was great, attendance was good--even higher than the first day last year.


It was good to talk to friends about my brother-in-law, Ken Epp, and remember him and his interest in the hobby.

It was also good to watch the kids watch the train go round-and-round. I discovered (again) that kids really like tunnels; they would watch it disappear and appear again and again and again. 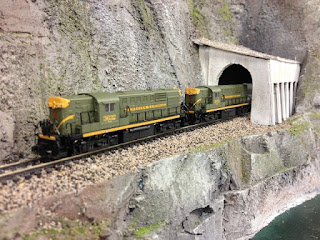 There was even some visiting power on the layout, courtesy of an N scale friend at the show.

The show runs again tomorrow, after which I will take a break from working on it. My goal is to complete the other side in time for the April, 2016 Winnipeg Model Railroad Club annual spring show.

Speaking of which, I realize I haven't posted a photo of what the other (unfinished) side of the layout looks like; find it below. The finished side looked like this just six weeks ago.

To view all the posts in this series, click here: Thompson River Canyon.