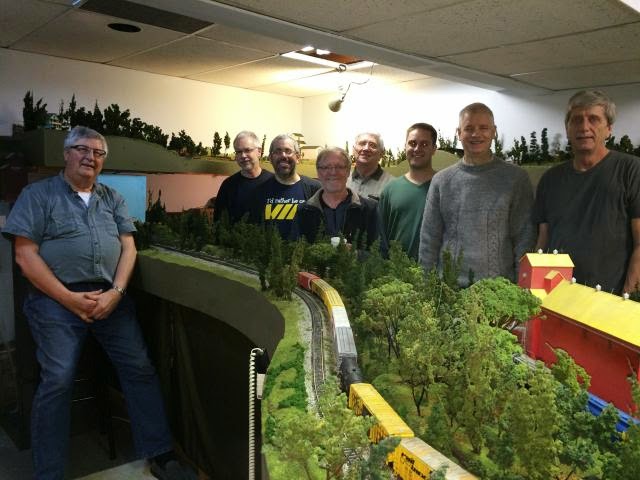 It's Louis Riel Day in Manitoba, a Monday off to celebrate the man who is considered the founder of the province--and the man who was hanged by the government of Canada in 1885 as a rebel.

Who says we don't have a colourful history in this country?

It was also a day to welcome some friends to the CP Rail M & M Sub. The gathering was occasioned by the visit of Rapido Trains founder and owner Jason Shron to Winnipeg.

(Maybe one day Canadian model railroaders can designate a day to celebrate the founding of this unique company. I wonder what day would be best? What would we call it? And how would we celebrate it? Jason would have an idea or two . . . .)

Anyway, eight of us ran trains and talked about the state and future of the hobby, and a few things in between.

We even managed to pick up a wayfaring stranger from Toronto who was supposed to be headed back to that city today on VIA; a derailment forced him to fly home. Somewhere along the way he met Jason, and was invited to come along.

In the photo above are Ray Goy, yours truly, Jason (the VIA T-shirt is a give-away), Canadian Railway Modeller founder and editor Morgan Turney, Walter Pankratz, Matt Soknacki (the wayfaring visitor from Toronto), Christopher Robinson and Ed Pankratz.

Even though there are a number of lone wolf model railroaders, ours is also a social hobby. I enjoy sharing it with friends.
Posted by JDL56 at 1:08 PM