The Gravy Train and Other Railway Idioms 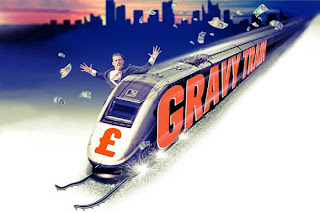 "Ending the Gray Train: Toronto's Not on Track Yet."

That was a headline in the May 30 Globe and Mail. It was a play on words from Toronto's embattled mayor, Rob Ford, who rode to power promising to "stop the gravy train."

Not being a resident of Toronto, I'm not as interested in the foibles of its mayor as much as I was taken by the words "gravy train." We see that used so many times to describe people--usually politicians--who take the easy way to riches, usually via the public purse.

But where did the phrase originate? And why is it still in use today when so few people actually take a train? And what other railway idioms are still in use?


The common explanation is that a "gravy run" or "gravy train" meant an easy run with good pay for the train crew--gravy being slang for something easy or cushy. Another suggests its because gravy is something luxurious, and a train ride is relaxing and requiring no effort on the part of the passenger.

Whatever the origin, we all know what it means today--it's not a compliment, unless we might be on that train, of course; otherwise, we want to stop it.

Gravy train isn't the only railway idiom still in use today. Others include having a one track mind; being railroaded (possibly due to the actions of the 19th century U.S. railroad barons); off the rails and back on the rails; thin as a rail; train of thought; end of the line; and train wreck (as in, "his life is a train wreck").

Some of them are anachronistic, like "that train has left the station." Many fewer trains leave stations today, but nobody says "that plane has left the airport" or "that bus has left the terminal" to describe the moment when it's too late for additional thoughts or decisions.

Then there's the "third rail," as in "social security is the third rail of politics." The third rail in a place like New York City is the rail used to provide power to electric locomotives that traveled underground. In politics, it means: Touch it and die.

Of course, hurricanes and tornadoes sound like freight trains, though I wonder how many people have stood trackside enough to know what that sounds like.

Considering how incidental trains are to most people in North America today (unless they block their car at at a railway crossing when they are in a hurry to get somewhere), it's interesting that so many railway terms still persist in the English language.