Christmas and Model Trains (1): Garrison Keillor and the Dangers of Christmas 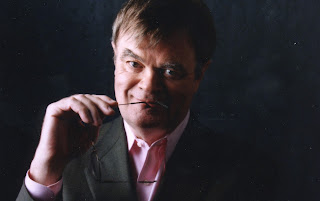 One of my favorite authors is Garrison Keillor of Prairie Home Companion fame.

Keillor has written about trains a few times, including "My North Dakota Railroad Days."

This fictitious piece in the New Yorker magazine is about the Prairie Queen, a train which crossed North Dakota on tracks so straight that "passengers stood on the rear of the platform of the parlor car in the trans–Dakota Canal, and trolled for fish."

As far as I know he has only written once about model trains, and that was for Land's End magazine, in a collection of short items called The Dangers of Christmas.

One of those dangers was "wanting something too much and therefore making it impossible."

And the thing he wanted? A model train. Wrote Keillor:

"I, for example, would dearly love to receive a model train layout similar to the one of my childhood, which rusted and decayed. I remind myself every year not to want it too much, but I do, and I never get it.

"A man my age can't simply walk into a store and buy a model train set for himself; people would talk, people would chuckle behind his back, and one day he'd come home to find an attorney sitting smiling in the living room, who would explain to him in easy-to-understand terms, using simple declarative sentences, why his financial affairs will hereafter be managed by his nephew Vince.

"I keep telling myself, 'I honestly don't care if that model train layout is under the tree or not,' but that's not the truth, and I know it."