Back in January I reported that Bowser was planning to bring out Canadian SD40-2s in a number of variants. I based that report on information from an industry insider, and also from modellers who had talked to Bowser represernatives at U.S. shows. And now I have heard it first-hand for myself.

I was at the Calgary Supertrain show April 21, and had a chance to talk to Bowser Project Manager Scott Davis. Scott confirmed that Bowser is creating Canadian-style SD40-2s for CP, CN and BC Rail in various versions (e.g. long nose, short nose, winterization hatches, etc.).

The initial design process has just begun, he said; he estimated delivery to be sometime in 2013.

I also talked to Scott about the company's very successful Canadian-style C-630M locomotives; I asked him what prompted Bowser to enter the Canadian market in such a big way at all, One big reason, he said, is that the Canadian economy is doing much better than the U.S. economy during this recession--so why not go where the market is strong? 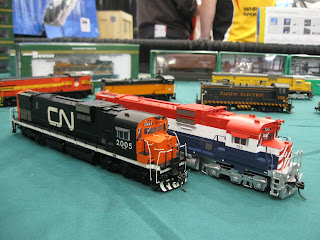 Sales have been so good, he said, that Bowser plans a second release of the Canadian C-630Ms in different numbers.

Scott also showed me test shells for the new Alco Century 636, which were on display along with other Bowser offerings. Doug noted that the side sill is not yet finished--the completed models will have that required skirting. 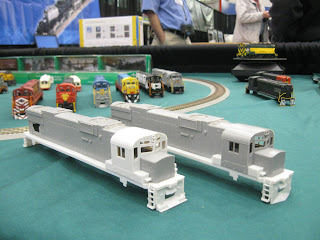 Last, Athearn was also at the show, and I was able to see their new beautiful GP38-2s, including the CN version. 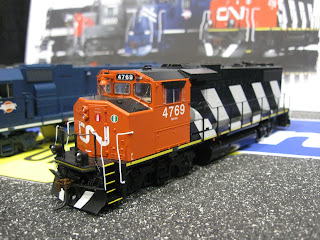 Speaking of Supertrain, it was a great show. At 60,000 square feet (four indoor soccer fields), and drawing about 15,000 people, it may not be as big as the biggest U.S. shows, but I'm sure it's the biggest show in Canada. 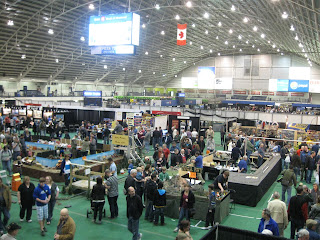 Like at most train shows, Supertrain is a mix of the stunning (more on that in a future post) and the ordinary, along with the usual sales--the reason many people come! 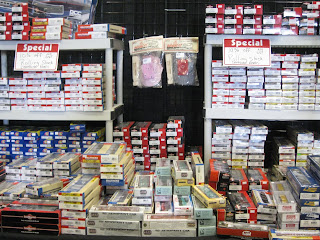