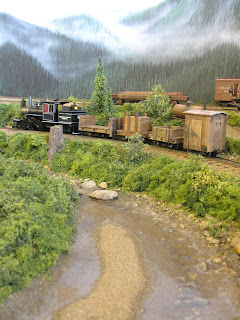 It’s summertime, so it’s a perfect time for re-runs and my rewind series of posts—like this one from 2012. It came to mind after I bumped into Geoff Brown recently; Geoff is the owner of this Great Canadian Model Railroad. The layout is in storage now; I hope it can be made available to the public again one day. In the meantime, you can enjoy it again here!

This great Canadian model railroad is a little different than most.

For starters, it’s over 1,900 kilometres (over 1,100 miles) from home. Second, I don’t know very much about its creators. Third, although it represents logging in B.C., it’s now on display on the Canadian prairies. 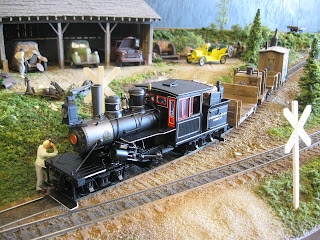 Here’s the story: A local modeler, Geoff Brown, decided he wanted an ON30 layout. While talking about it with a friend in B.C., he was told that just such a layout was for sale in the city of Victoria, on Vancouver Island. Geoff bought it, and had it transported to Winnipeg, where it has been set up at Elmwood Hobby Works—which is where I took photos of it.

From what Geoff told me, it took them just over a year to build. The layout, which is in four four-foot sections, uses a frame made from 3/8th square steel; the sub base is made of 3/8th inch plywood.
﻿

The scenery is made from 2 inch Styrofoam, the track is handlaid code 100 and the turnouts were built by Wayne Paulson and Dan Rossell.

The trees were made from wire and sisal rope, painted and then detailed with Woodland Scenics ground foam. The bigger trees were made by Dave Tomljenovich. The backdrop is hand-painted.


All the buildings were scratchbuilt from styrene and wood. The water tank is a replica of a real tank that was used on Vancouver Island. 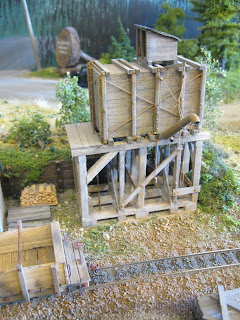 The layout won best of show at a regional meet in Nanaimo, B.C.—it’s easy to see why! 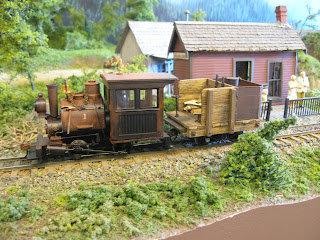 According to Geoff, the layout became available when one of the owners needed to move out of his house. I’m sorry he had to give it up, but happy for those of us who live in Winnipeg!

I don't have space on this blog post for all the photos I shot; you can find more pictures of the Miller Creek Forestry Museum on my Flickr page.