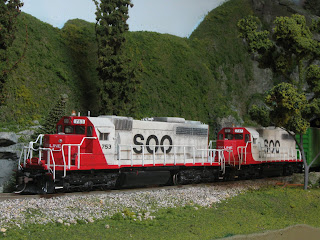 This Labour Day weekend I've been "labouring" on the layout--doing some fine-tuning, finding and fixing bugs and cleaning the layout room. I've also enjoyed watching my new units run in their first "revenue" service, as in the photos above and below.

One thing I discovered is that my trusty old Athearn Blue Box SD40-2 units aren't quite up to it when it comes to mastering the new, steeper grade in my helix. (The result of changes to the layout; see Going, going, gone.) They can pull 12-14 cars no problem, but they really struggle with the 18-20 that is normal on the M & M Sub.

This is not the case for my Kato, Atlas, Proto or newer Athearn power. They have no trouble at all surmounting the grade.

One option is to replace my Athearn Blue Box with newer power--something I am slowly doing. But there are no easy-to-obtain replacements for CP Rail's SD40-2 units. (Atlas--are you listening?) In the meantime, I've decided to go back to the future, as it were.

Back when I started the layout, I didn't own enough powered units for all the trains I wanted to run. (Due to lack of funds.) I compensated by using non-powered units, which were much cheaper. I used two powered units to climb from one level to the other, but a powered and non-powered unit to come down.

I'm doing a variation on that theme again. This time, I'm using my Blue Box units for trains coming down from the upper level, and the newer power for going up. Locomotives are switched between levels by hand in the staging yards. (The upper and lower staging yards are located above each other.)

Once again, necessity is the mother of invention. Or maybe I found a labour saving device on this Labour Day weekend. 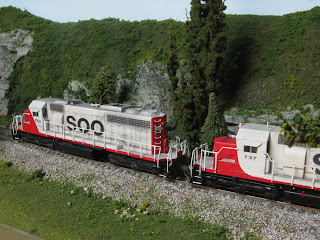