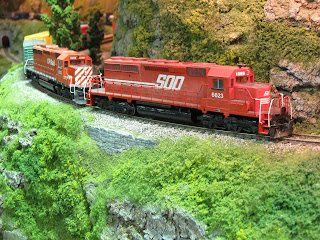 The CP Rail M & M Sub. is a very young layout,
compared to others in Winnipeg.

What's the oldest home layout where you live?

Before going further, a word of explanation: By oldest, I mean a layout that has been in the same location from the time it was started until today. It could have been expanded and updated, but some part of it has to date back to when it was begun.

Using that definition, the oldest layout in Winnipeg, where I live, was started in 1950. That makes it 60 years old!

The next three oldest layouts were begun in 1968. Another one was started in 1969. Stafford Swain's CNR Whiteshell Subdivision dates back to 1975.

Compared to them, my 16 year-old layout is a mere child.

Considering how frequently people move today, I doubt we'll see layouts as old as these ever again.

P.S. When I asked the owner of the oldest layout in Winnipeg what era he modelled, he said "the transition era—but it was the modern era when I started!"
Posted by JDL56 at 7:09 PM