Stick It To Them! Or, An Easy Way To Do Layout Crowd Control 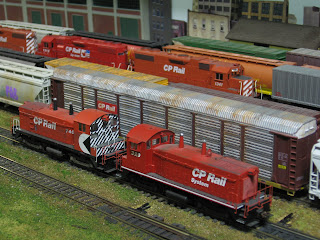 The Fort Frances yard is crowded—just like the
layout room during a tour.

In a few months, the CP Rail M & M Sub. will be on tour as part of the May 28-30 NMRA Thousand Lakes Region convention here in Winnipeg. Between 100-200 people will visit the layout in a few hours on Sunday afternoon.

Since the layout room can accommodate only about 8-10 people at at time, this could pose a problem. But it doesn’t, thanks to my stick method of crowd control.

There are two ways to control crowds during a layout tour. One way is to post someone at the entrance, and ask them to let people in. The problem with this method is that a) it requires someone to do a really boring job and b) it can be hard for them to keep count—are there eight in the room now, or ten, or more?

The way I like to do it is to let visitors regulate themselves. All it requires is a stick.

The way it works is like this: The first eight people into the layout room get a stick. (It can be any kind of stick, large or small; a popsicle stick will do.) When they leave, they hand the stick to the next person in line, who can now come in. When that person, leaves, he gives it to the next in line, and so on.

The rule is simple: If you don't have a stick, you can' t come in.

Of course, other things can be used in place of sticks—an actual “ticket” or pass, or another object of some kind.

To keep traffic flowing, I encourage people to be mindful of the line-ups, and not to stay so long that they prevent others from getting a look.

I’ve used this method to "stick it to them" for two conventions. It has worked flawlessly so far.
Posted by JDL56 at 2:09 PM