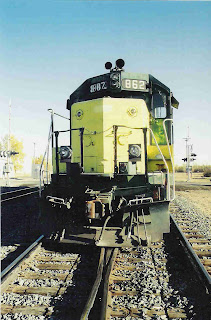 I was going through some old prints the other day and came across this photo of an "oops!" It was taken in Flaxton, North Dakota in 2003. The GP 35 belongs to the Dakota, Missouri Valley and Western (DMVW), which operates in North Dakota, South Dakota and Montana. The unit was still running when I took the photo, but no crew members were around; a railroader told me later that, in all likelihood, they had gone to a nearby restaurant to wait for the re-rail crew to show up.

Just goes to show that it's not only model railroaders who experience derailments now and then.
Posted by JDL56 at 5:30 PM