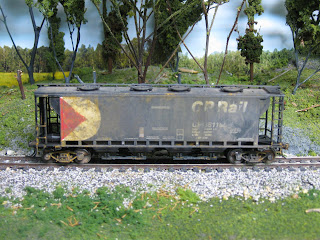 When True Line Trains brought out its CP Rail slab side hoppers, I just knew I had to get one. But the car couldn't be in pristine condition on my early-1990s era CP Rail Manitoba & Minnesota Subdivision. The prototype was built in 1959; by the time it finished service in 1994, it would have been extremely weathered, as in the photo of #385816 (below), built in 1965 and pictured in 2009 in Squamish, B.C. 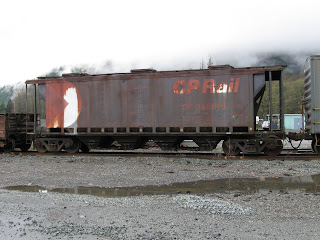 My preferred method for aging and weathering freight cars is--wait for it--SOS pads. These abrasive kitchen aids are designed to "clean from A to Z" according to the box they come in; they are also pretty handy for removing lettering from rolling stock, or aging a car. 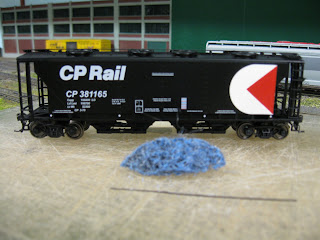 The model before weathering. In the foreground:
The piece of SOS pad.

I start by cutting a small piece off a pad. I wash out the soap, and let it dry. Next, I gently rub it on the area where I wish to remove the lettering. After a short while you will notice the paint beginning to disappear; you can keep rubbing until you obtain the desired effect. Be careful; you can take off all the paint if you don't pay attention (not a terrible problem in extreme weathering, mind you).

In this case, I wanted the car to look very old. I also wanted to it to look grimy and dirty. After rubbing off some of the lettering and markings, I used a combination of chalk and water paint to make it look as well-used as possible. I used the photo of #385816 for inspiration; I was not trying to duplicate it.

It took a number of tries to get the effect I was looking for, but now my CP Rail slab side hopper looks like it belongs in the latter part of the 20th century, having served well--even if it didn't receive very much TLC in its later years. 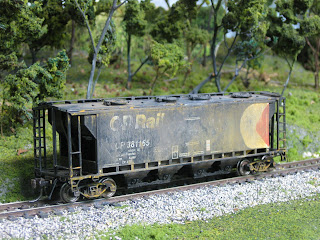