Modelling the Transition Era on the Manitoba & Minnesota Sub. 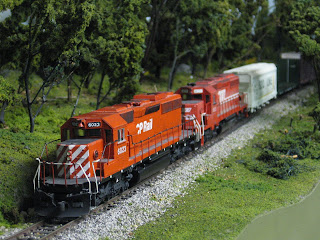 When people ask what era I'm modelling, I tell them: "The transition era."

No, not that transition era--the time when diesels were replacing steam locomotives in the 1950s.

I'm talking about the early to mid-1990s, when newer power like the AC4400s and the SD70s and 80s were beginning to appear on the scene, challenging the ubiquitous SD40-2s.

The CP Rail Manitoba & Minnesota Sub. is set in the early 1990s, with a cut-off date of 1995. Almost all the mainline power on the layout are SD40-2 units; two new AC400s are the only sign of changes to come.

For me, the SD40-2 is what railroading is all about; the newer units, for some reason, leave me cold--they are big and imposing, but souless, in a way I can't describe.

(I wonder if this is how model railroaders of the previous generation felt about diesels?)

At first, I thought the newer power was the ugliest thing I had ever seen. I've gotten used to them by now. But it still is special to see an SD40-2 in a consist when out railfanning.

The real world may have moved on to newer power, but in my basement the SD40-2 still rules. I wouldn't have it any other way.
Posted by JDL56 at 7:07 PM